The Philippines continues its downward trajectory in terms of internet freedom according to the Freedom on the Net 2019 report, published by international nonprofit Freedom House.

Every year, Freedom House publishes assessments on global internet freedom. This year, the report is titled “The Crisis of Social Media,” highlighting how social media spaces have been exploited due to lack of regulations in terms of their susceptibility to be utilized as tools for “political distortion and social control.”

Significantly, “while social media have at times served as a level playing field for civic discussion, they are now tilting dangerously toward illiberalism, exposing citizens to an unprecedented crackdown on their fundamental freedoms,” according to the report.

“The future of internet freedom rests on our ability to fix social media,” the report added.

Global internet freedom is on its ninth consecutive year of decline in 2019, says the report. For its part, the Philippines’ ranking declined from “free” to “partly free” in 2018, when it scored 69/100 (or 31/100 in the previous scoring system). This year, the country remains “partly free” with a score of 66/100, but dropped three points.

“Increased content manipulation, a growing number of libel cases related to online activity, and the proactive removal of content by news sites to forestall potential legal action” caused the decline, according to the Philippines’ country report.

The country report noted that “the Philippines’ internet freedom decline has occurred amidst an erosion of political and civil rights under President Rodrigo Duterte, whose war on drugs since 2016 has led to thousands of extrajudicial killings as well as vigilante justice. Impunity remains the norm for crimes against activists and journalists.”

Below are some notable observations from the report.

The Freedom on the Net 2019 includes recommendations based on the insights in its report.

A PDF of the report may be downloaded here.

On the celebration of press freedom. e-transactions, and the financial capital for 2022 polls: The FMA Digital Rights Roundup

May 1-15, 2021 The Digital Rights Roundup, published by the Foundation for Media Alternatives, contains regular updates on what Filipinos need to know about their digital rights. 345,000 sensitive legal documents from the Philippines government Read more… 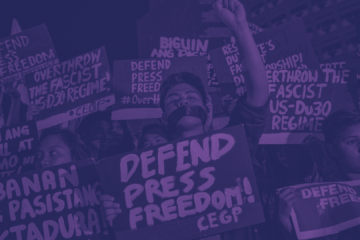 FMA statement on World Press Freedom Day 2021 Journalists play a key role in society, and it’s not only because the work they do involves public interest. Independent, critical, and accurate information actually saves lives, Read more…

On profiling, press freedom, and the digital divide: The FMA Digital Rights Roundup

April 16-30, 2021 The Digital Rights Roundup, published by the Foundation for Media Alternatives, contains regular updates on what Filipinos need to know about their digital rights. Two lawyers appointed as usec, asec at DICT Read more…

Any cookies that may not be particularly necessary for the website to function and is used specifically to collect user personal data via analytics, ads, other embedded contents are termed as non-necessary cookies. It is mandatory to procure user consent prior to running these cookies on your website.