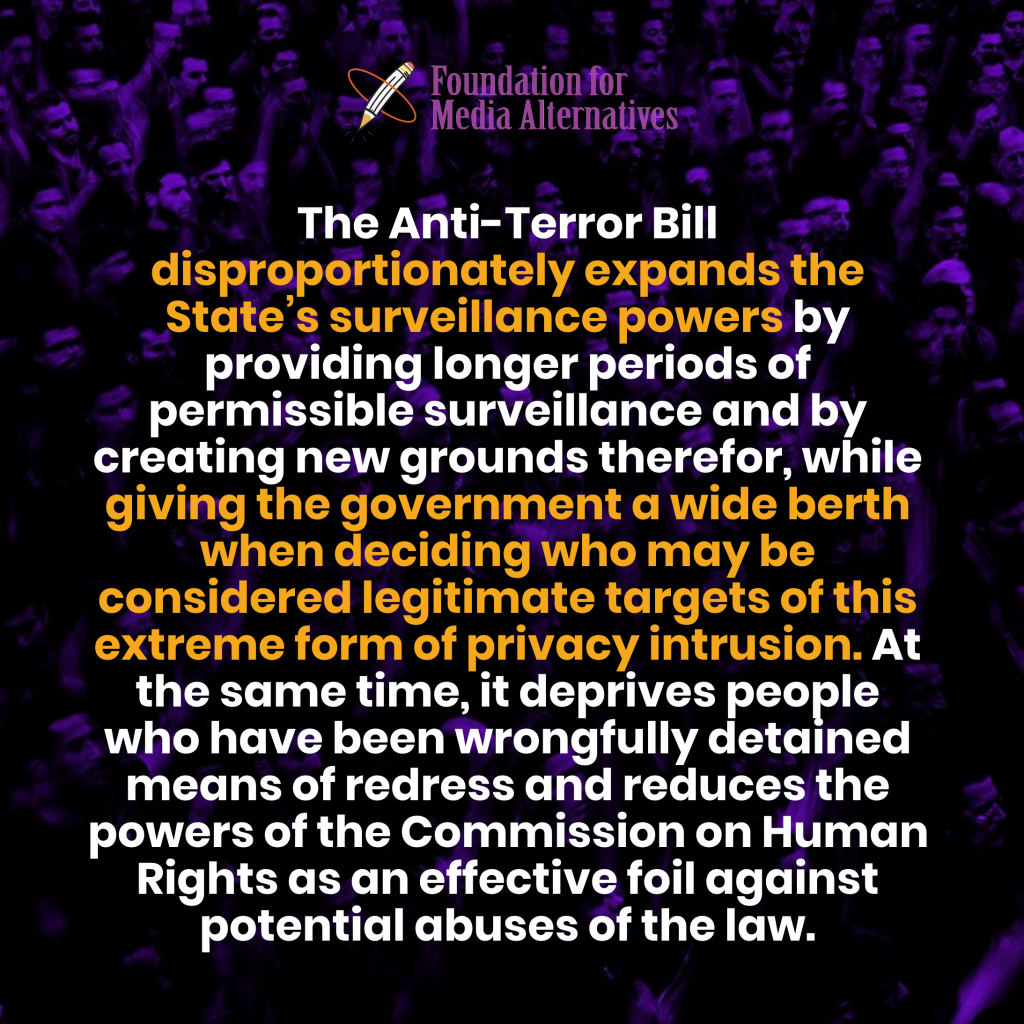 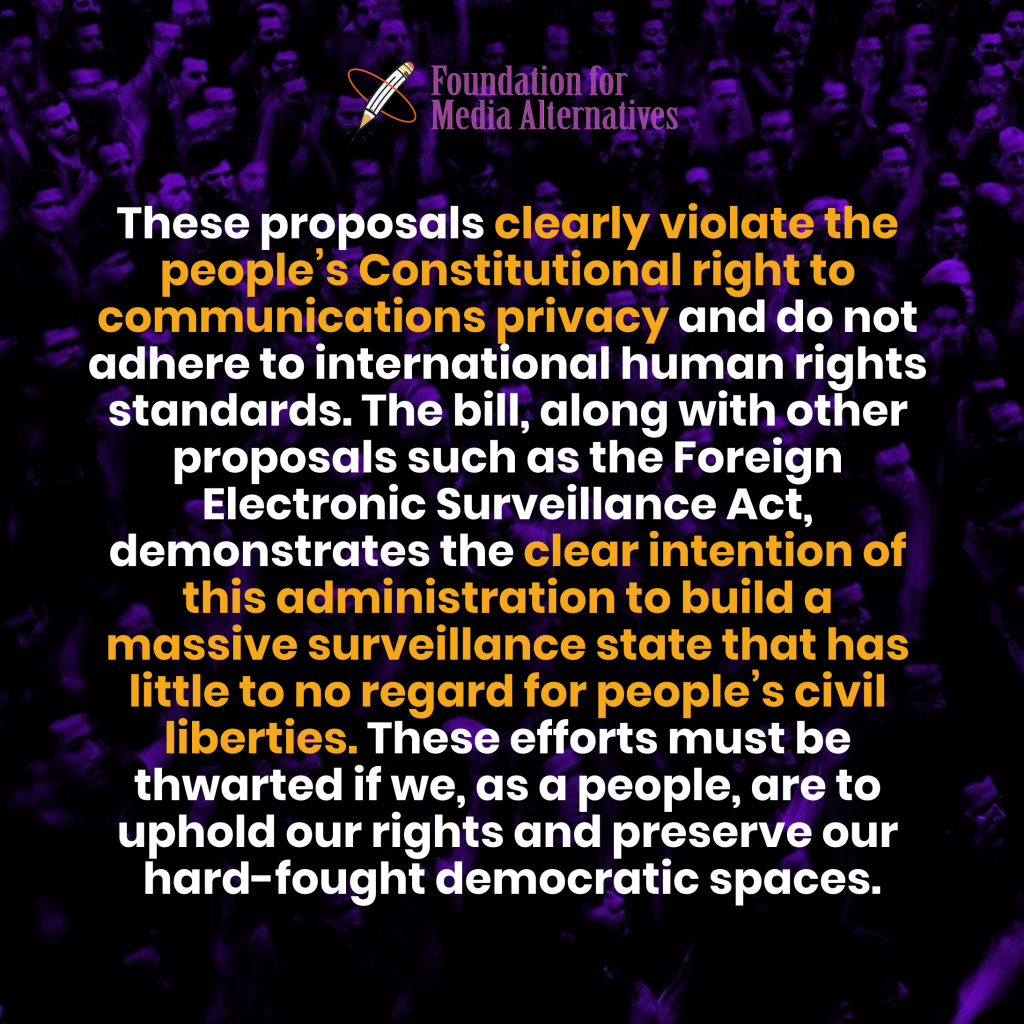 In a treacherous move that takes advantage of the lockdown due to COVID19 in the country, the House of Representatives approved the Anti-Terrorism Act of 2020 and is rushing it through final reading before they go on a two-month break from June 6th.

Human rights groups led by In Defense of Human Rights and Dignity Movement (iDEFEND) and the Philippine Alliance of Human Rights Advocates (PAHRA), join civil society groups such as KALIPUNAN NG KILUSANG MASA, WORLD MARCH OF WOMEN, KILUSAN PARA SA PAMBANSANG DEMOKRASYA, and SANLAKAS in condemning the grossly misplaced priorities of the Philippine Congress at a time when the people are struggling with a global pandemic.

“The Congressional railroading of the anti-terrorism bill portends tyranny and the iron hand suppression of the freedom of expression” said Ms. Nilda Sevilla, Co-Chairperson of the Families of Victims of Involuntary Disappearance.

“Under the guise of national security, the Duterte government is exploiting the COVID19 crisis to further roll out measures to repress citizens, criminalize dissent, and expand its surveillance of women activists, ordinary citizens and government critics. Rather than the terror bill, at this juncture, women need adequate and comprehensive social protection, mass transportation, revitalization of our public health system, mass testing, income guarantees, and access to sustainable livelihoods. We need protection from violence and abuses against women and the terror bill will not make us feel safe,” added Ms. Mary Ann Manahan of World March of Women.

The Secretary General of Kilusan Para sa Pambansang Demokrasya, Ms. Virginia Suarez-Pinlac, said “It is clear treachery and thus condemnable, that this is being rushed now in Congress when the people’s concerns are urgent humanitarian and economic needs. The proposed draconian measure is more anti-people and anti-democratic than anti-terrorist. Under the present regime, which has strong tendency to disregard rule of law, the anti-terror bill certainly fits into its authoritarian plot. Among its other provisions, the definition alone of terrorism and terrorist is prone to be abused by authorities. Many people’s organizations, including KILUSAN and its affiliates, legal luminaries, the Catholic church and other churches and many other democratic and human rights activists have been exposing and opposing the anti-terror bill since it was first deliberated in the previous Congress. Its encompassing definition will surely translate to abuse and repression by security forces, with little accountability or reprisal not unlike the big-time quarantine violators as opposed to “small fry” or ordinary citizens.”

The Foundation for Media Alternatives’ Executive Director, Ms. Liza Garcia, reiterated that “The Anti-Terror Bill disproportionately expands the State’s surveillance powers by providing longer periods of permissible surveillance and by creating new grounds therefor, while giving the government a wide berth when deciding who may be considered legitimate targets of this extreme form of privacy intrusion. At the same time, it deprives people who have been wrongfully detained means of redress and reduces the powers of the Commission on Human Rights as an effective foil against potential abuses of the law. These proposals clearly violate the people’s Constitutional right to communications privacy and do not adhere to international human rights standards. The bill, along with other proposals such as the Foreign Electronic Surveillance Act, demonstrates the clear intention of this administration to build a massive surveillance state that has little to no regard for people’s civil liberties. These efforts must be thwarted if we, as a people, are to uphold our rights and preserve our hard-fought democratic spaces.”

“Ang pinalakas na anti terror bill ay hindi makakatulong para maibsan ang kahirapan dinaranas dahil sa Covid 19 at kapalpakan ng rehimeng Duterte laban sa pandemya. Pambubusal ito sa diskuntento ng mamamayan para pagtakpan ang kapalpakan ng rehimen Duterte. (The ‘enhanced’ anti-terror bill will not help to curb the suffering of the people due to Covid19 and the incompetence of the Duterte regime’s response to it; it will only serve to suppress discontent of the people to cover up the many failures of the Duterte regime)” cited Mr. Val Vibal of the Aniban ng mga Manggagawa sa Agrikultura (AMA).

“The Anti-Terror Bill is anti-people and unconstitutional: Article 3, Section 4 of the Philippine Constitution prohibits such a law: ‘no law shall be passed abridging the freedom of speech, of expression or of the press, or the right of the people peaceably to assemble and petition government for redress of grievances’; however with the anti-terrorism act, mere suspicion will warrant invasive surveillance as well as extended periods of detention without enough legal recourse for its victims, said Ms. Nymia Simbulan, Chairperson of the Philippine Alliance of Human Rights Advocates (PAHRA).

Fr. Christian Buenafe, O’Carm, chairperson of the Task Force Detainees of the Philippines, alarmed at the potential for increased number of victims of arbitrary arrests and detention of human rights defenders, said he “prays that this storm of repression stirred up by our legislators do not destroy the institution, in the eyes of our people. History teaches us that repression breeds resistance. It is our Christian duty to denounce evil in our midst. State terror will not silence a people defending their rights and freedoms.

Ang Anti-Terrorism Bill ay lumilikha lalo ng takot, sa halip na kapayapaan sa isip, damdamin at buhay, laluna ng pinakamahihirap sa ating lipunan. (The Anti-Terrorism Bill is creating more fear, not peace in our minds, in our hearts, in our lives, especially among the most impoverished in our society).”

The above organisations called for the immediate revocation of the Anti- terrorism Act of 2020 by the Philippine Congress. They call on the Filipino citizenry to resist these designs toward full dictatorship and raise their voices on the real urgent issues affecting our country.

“When law becomes the tool of the rich and powerful against the poor and the suffering, it is our duty to resist, and resist actively,” said Judy Pasimio, spokesperson of iDEFEND, “when the most basic needs of our people can hardly be met by the government yet we are also forced into fearful existence- fear for ourselves and fear for our families- then our recourse is the defense of our rights and our dignity, against the terrorism of the State, Pasimio added.