Kevin Raymundo is a visual artist and animator. He is the creator of the comics Tarantadong Kalbo, which uses simple illustrations and pop culture references and personalities to feature commentaries and make necessary noise on current events and social issues. Look for his misadventures on Tarantadong Kalbo’s Facebook, Instagram and Twitter accounts. 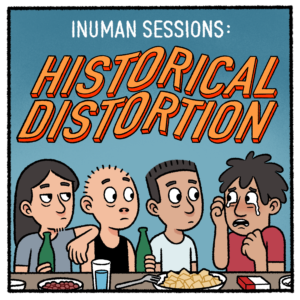 This comic strip is entitled “Inuman Sessions: Historical Distortion.” It starts with our characters seated with bottles of beer on the table. The four characters are all males: one with long hair, one who is bald or kalbo, one with crew cut hair, and another with curly hair or kulot. 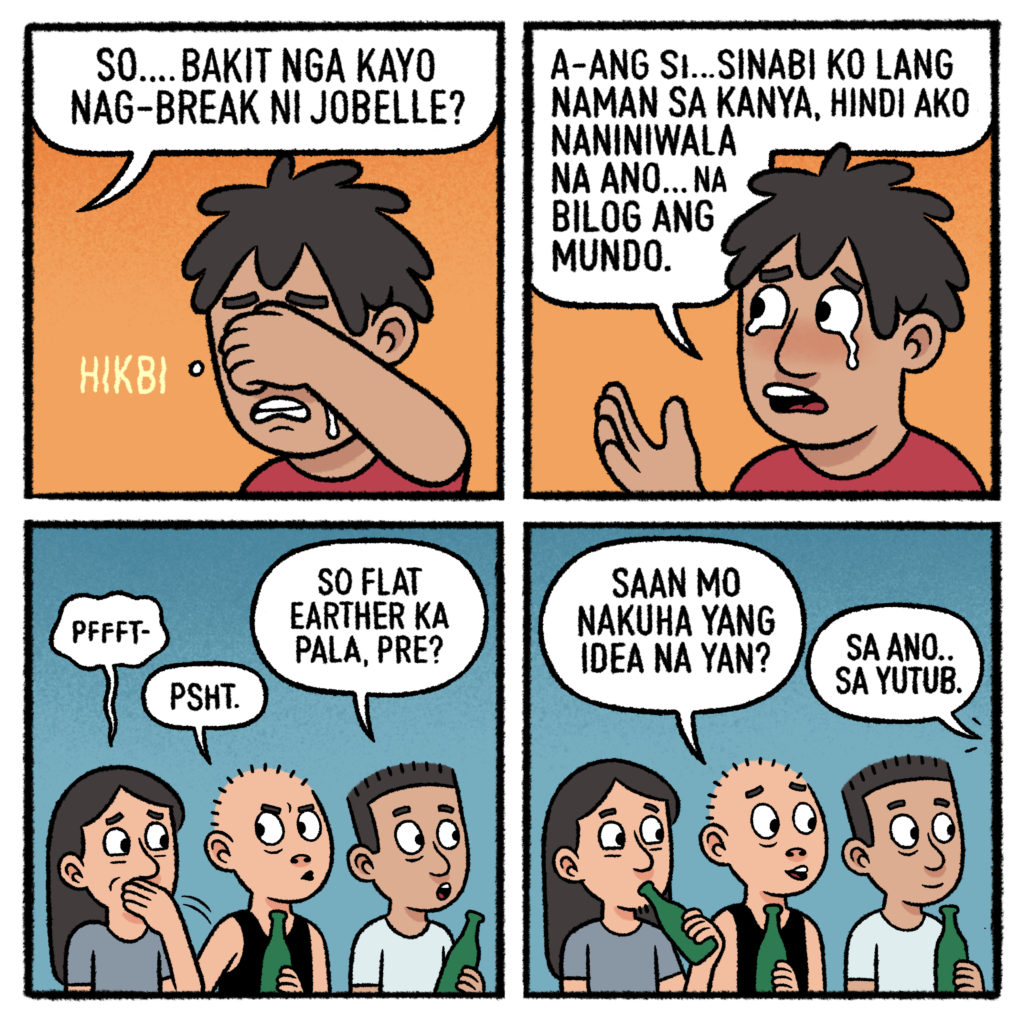 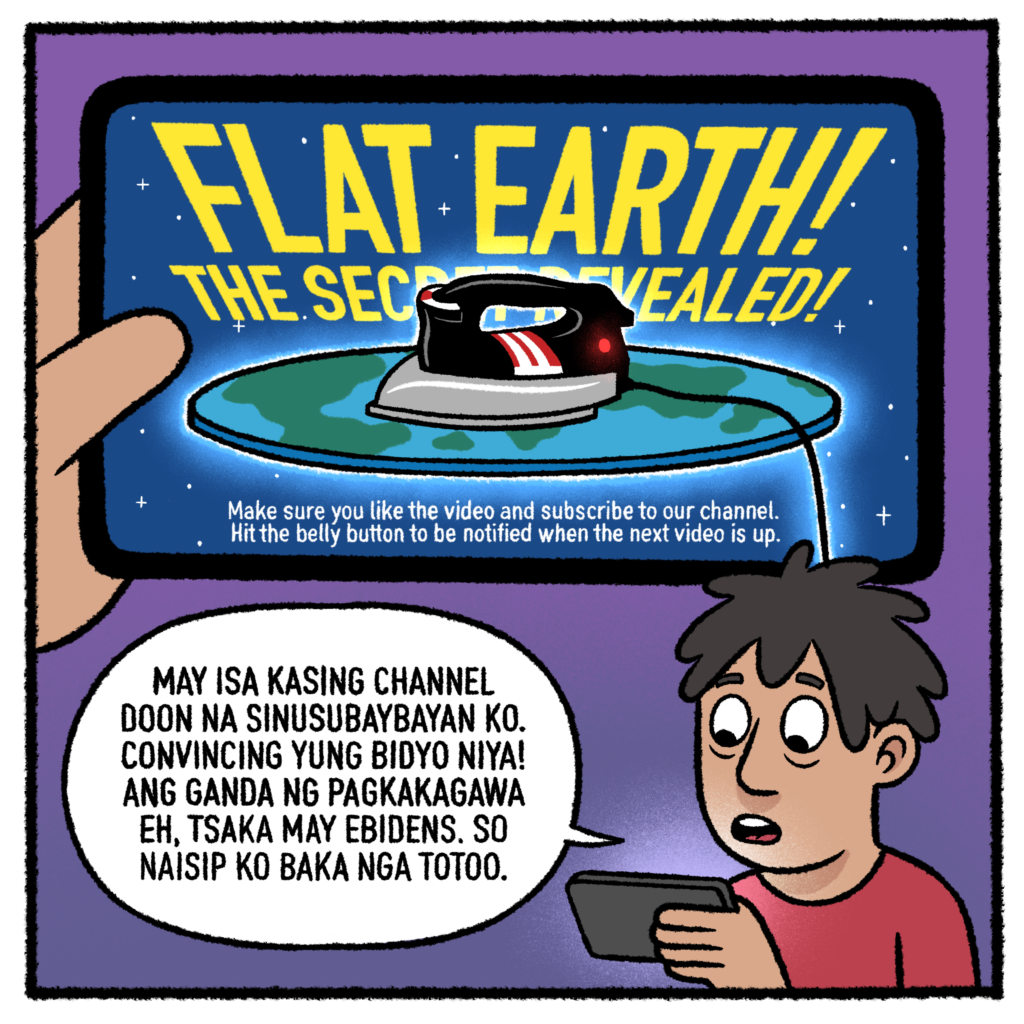 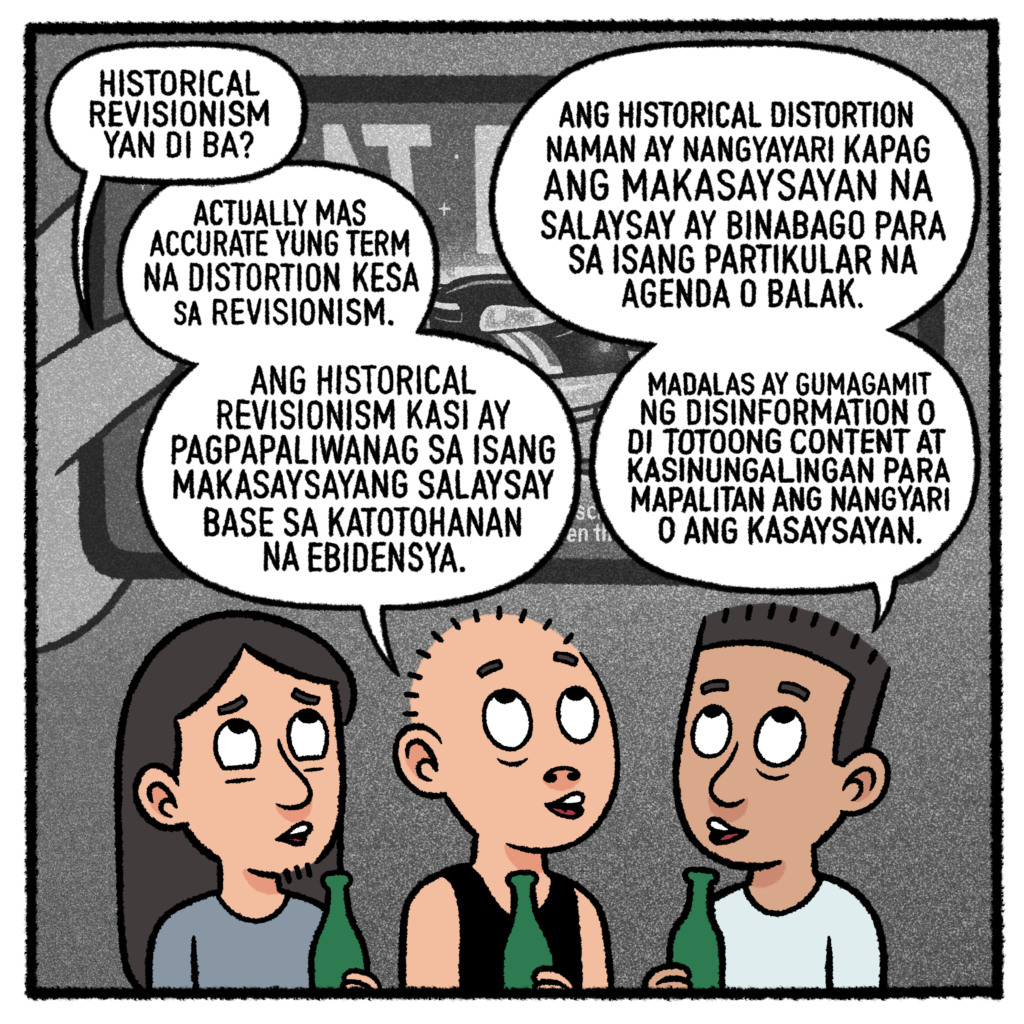 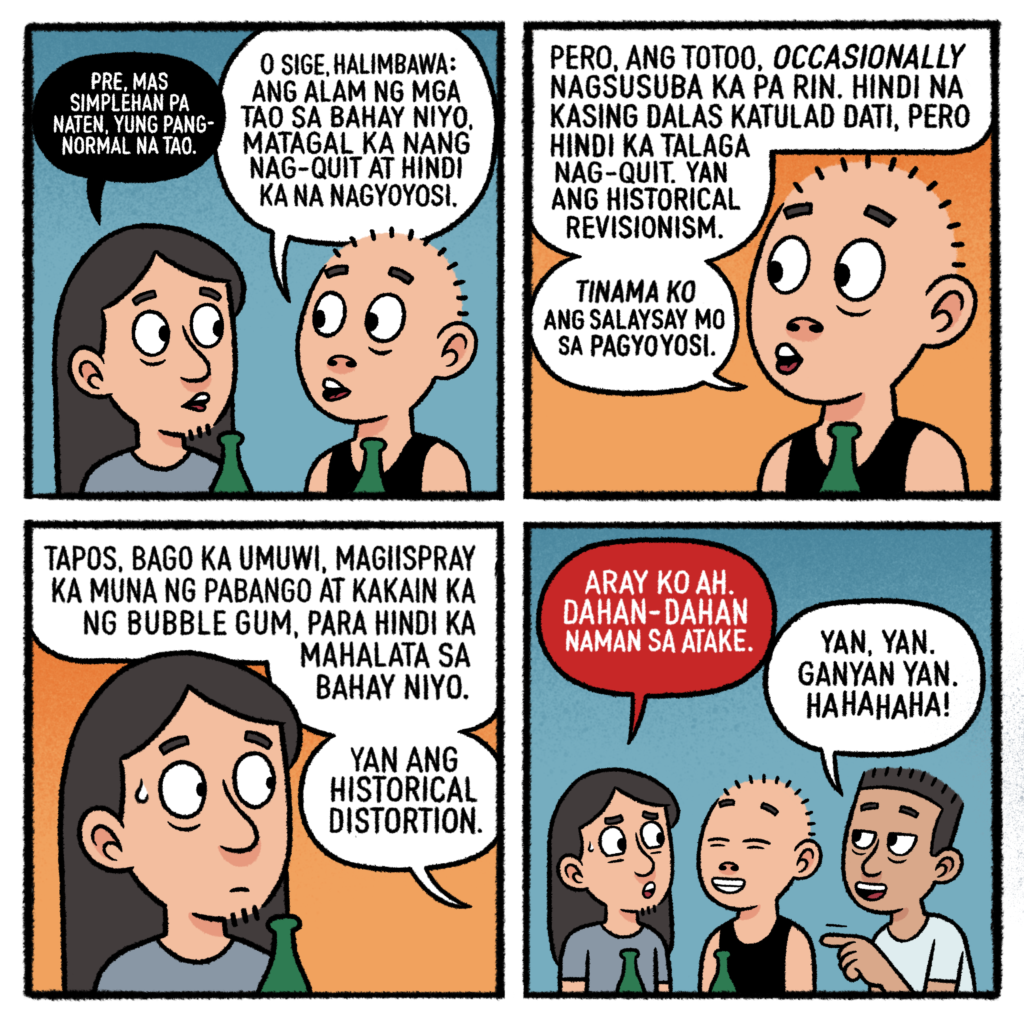 The curly-haired character is crying and one of the other character seeks about reason why he and Jobelle broke up. “I told her that I don’t believe that the earth is round,” he reasoned. The long-haired character replied with a hint of a dismissive attitude while the other two asked more questions: “So are you a flat earther? Where did you get that idea from?” The curly-haired proceeded by telling that he watches a Youtube channel with convincing videos about it.

They simplified the concepts by giving personal examples first. Kalbo attacked the long-haired character with an analogy: “Your family thinks you already quit smoking. But even if you’re only smoking occasionally now, you still haven’t really quitted. I corrected your narrative, that’s historical revisionism. Historical distortion happens before you go home, when you use perfume and chew gum to hide the smell of cigarettes. The crew cut character agreed and laughed at the long-haired character. 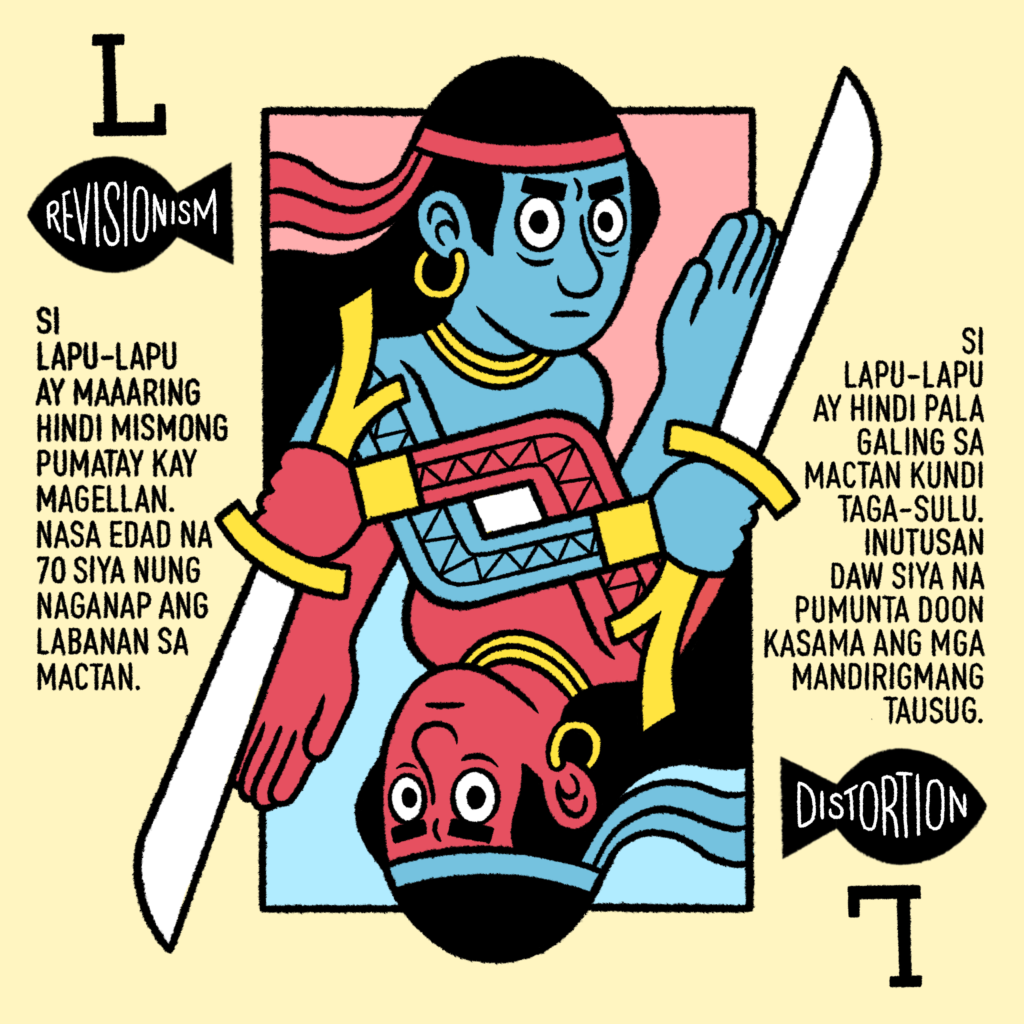 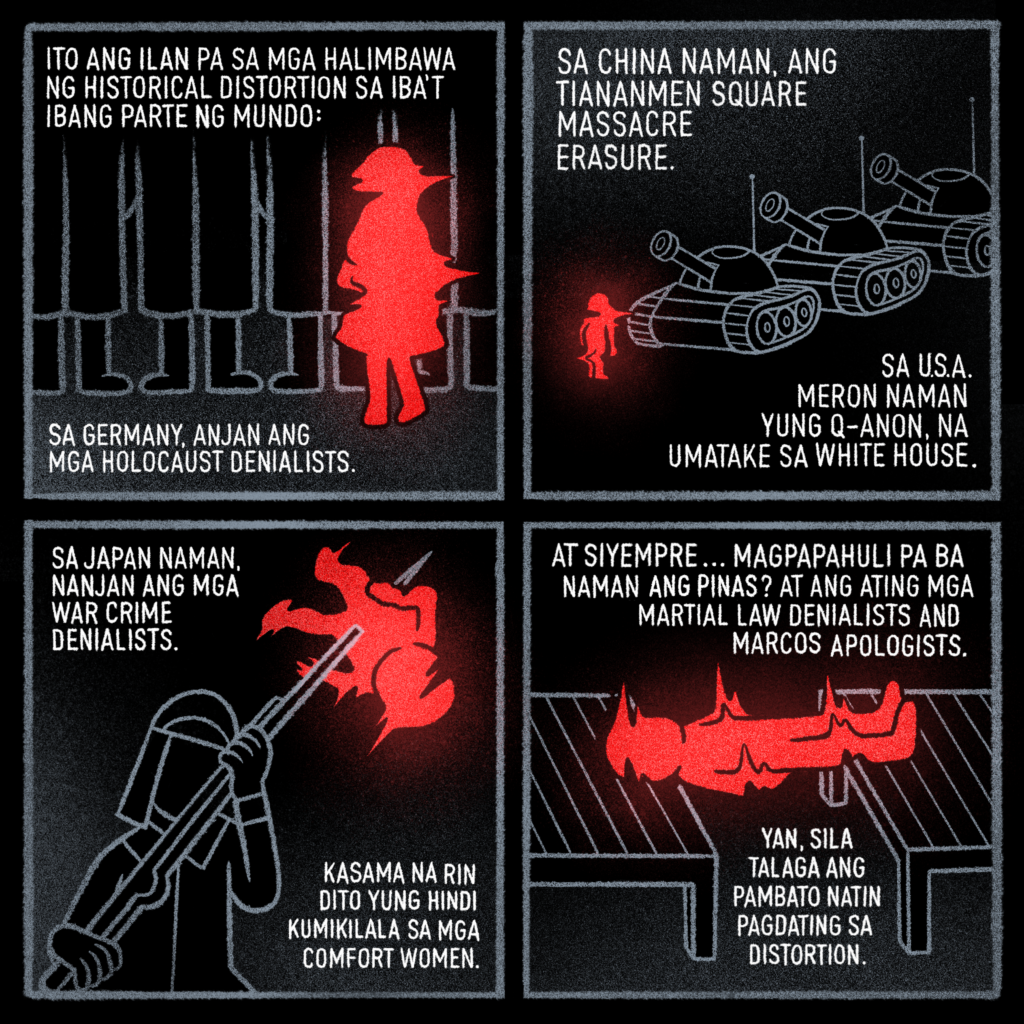 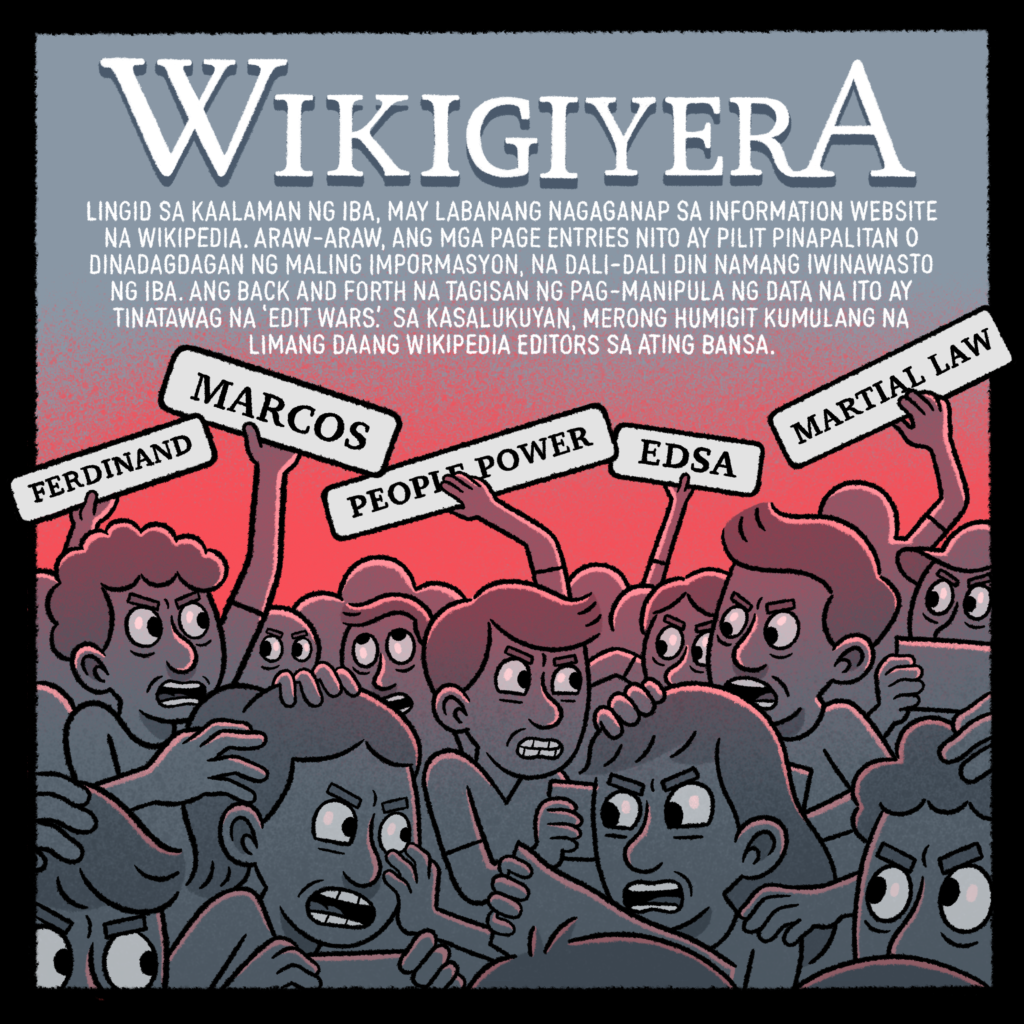 Then they went on with historical narratives in the country. Here’s an example of historical revisionism: Lapu-Lapu might not be the one who killed Magellan since Lapu-Lapu was 70 years old during the battle of Mactan. On the other hand, historical distortion arises with the statements that say Lapu-Lapu is from Sulu and not from Mactan and that he was just ordered to go there with Tausug warriors.

Historical distortion also exists in other parts of the world. In Germany, there are holocaust denialists. In China, there’s the Tiananmen Square Massacre erasure. In the US, there’s the Q-Anon that attacked the White House. In Japan, there are war crime denialists, which also include failure to recognize comfort women.

In the Philippines, there are martial law denialists and Marcos apologists. Despite all the deception of their family, from stealing funds to killing critics, they still continue to thrive politically. It shows the power of propaganda machines that allow them to distort the truth.

Historical distortion has already reached the internet with the emergence of WIKIGIYERA, where some people manipulate information on Wikipedia and are corrected by other people. This is also called ‘edit wars.’ Currently, there are more or less 500 Wikipedia editors in the Philippines. Some of them are ‘Wiki warriors’ or web developers, computer programmers, and other young professionals who regularly edit problematic entries. 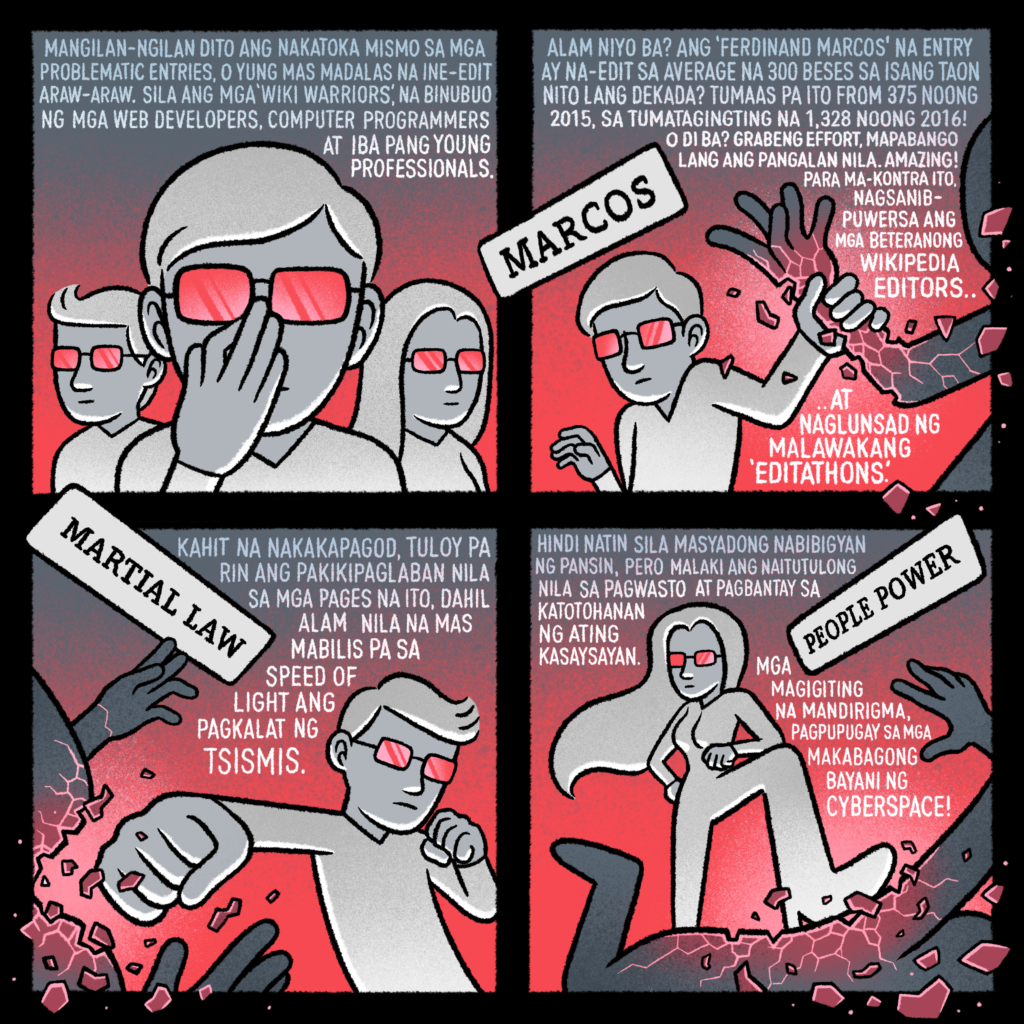 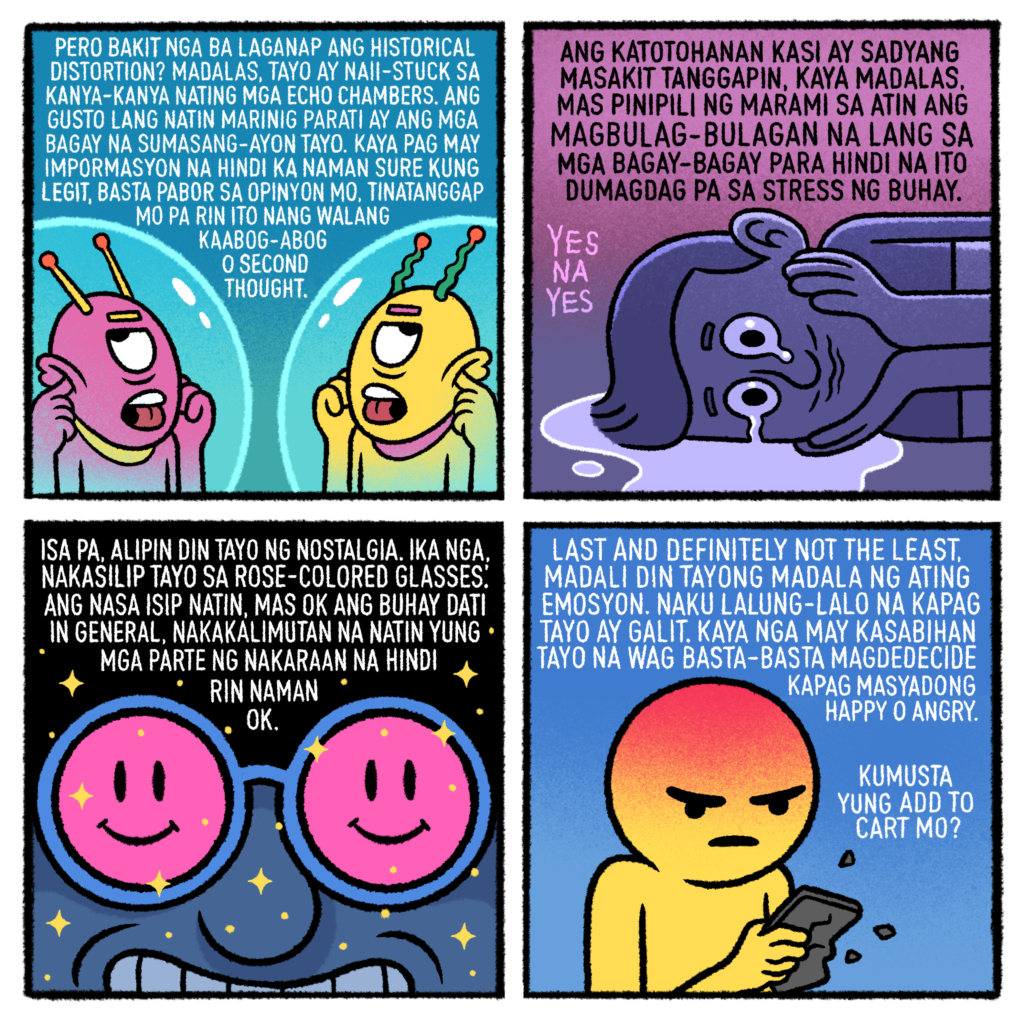 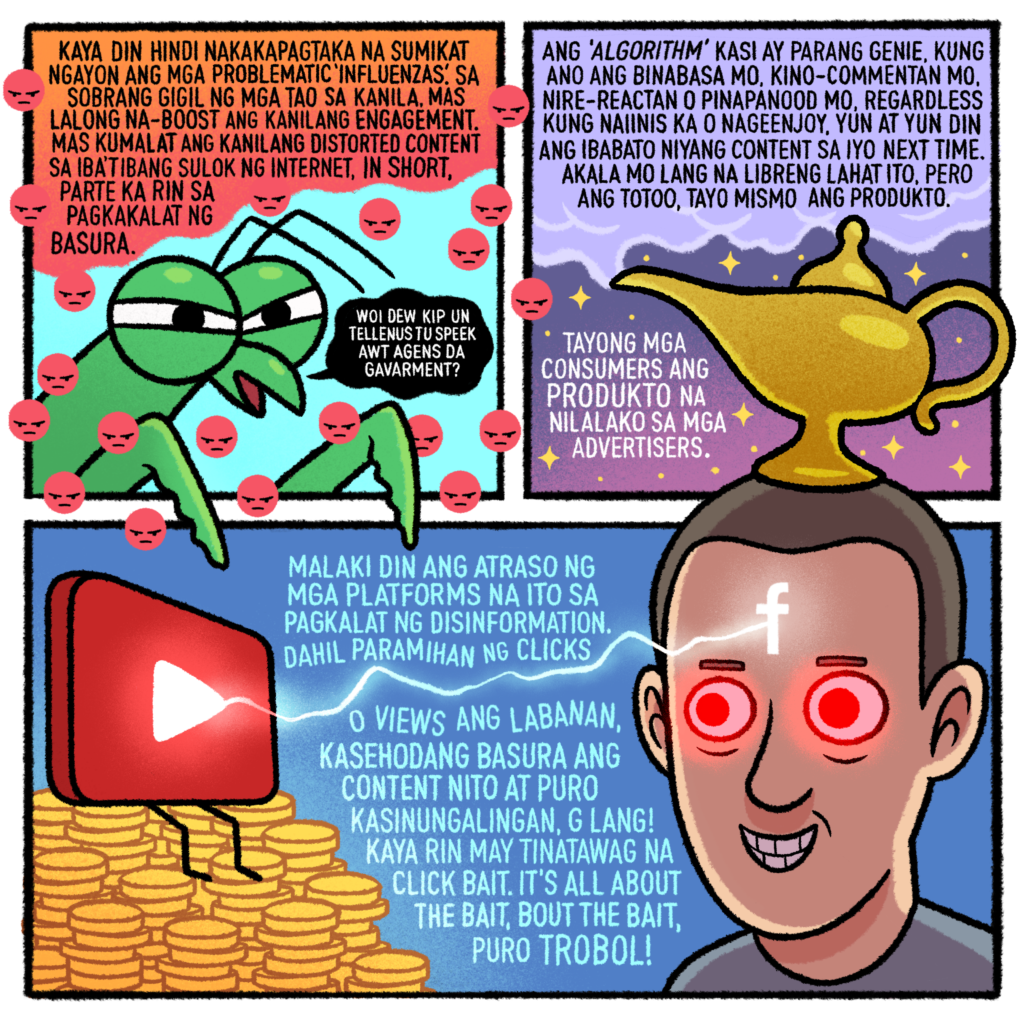 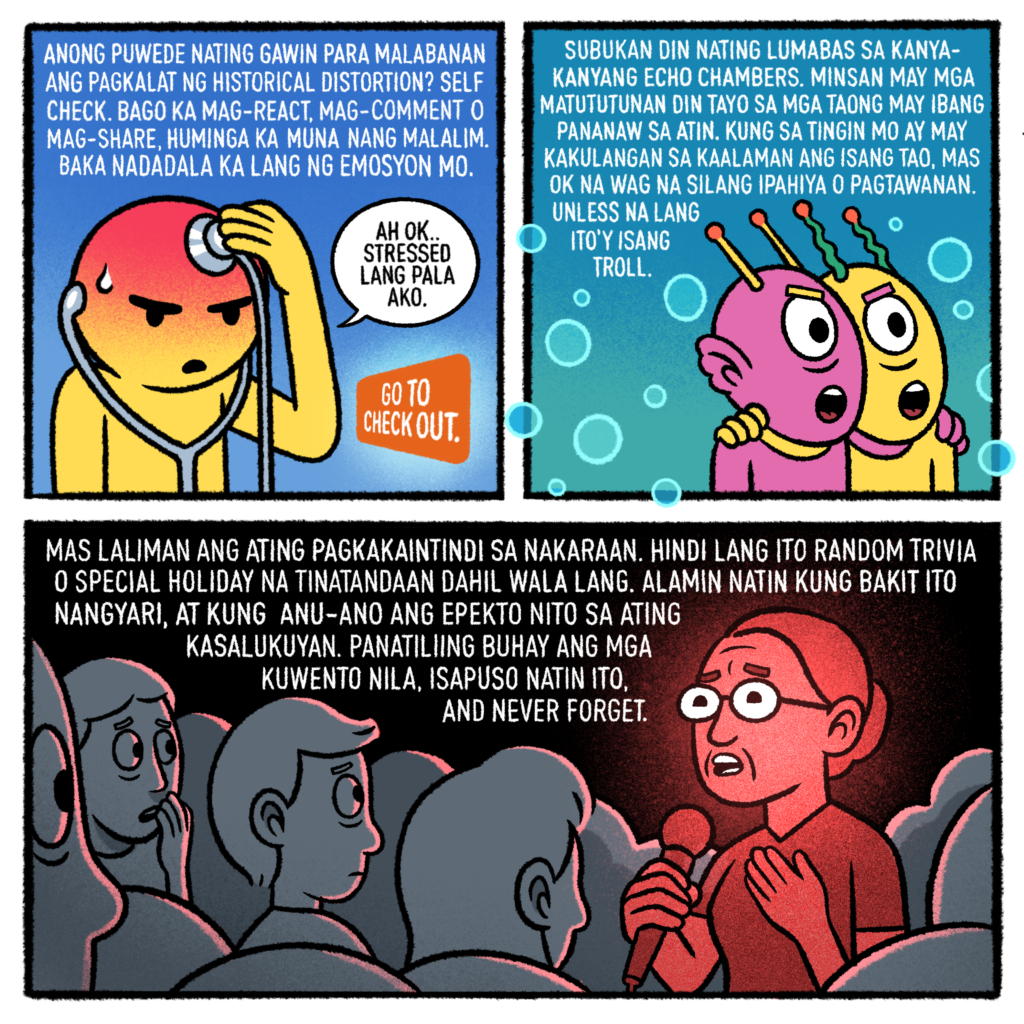 Did you know that the entry, ‘Ferdinand Marcos’ was edited at an average frequency of 300 times in one year, just this decade. It increased from 375 in 2015 to 1,328 in 2016. Wikipedia editors join forces to get rid of problematic entries, in turn launching widespread ‘Editathons.’ Even with the tedious work that comes with this, Wikipedia editors continue to fight these because they are aware of how rumors spread faster than the speed of light. They might not be given enough recognition, but what they do greatly impacts history. Salute to modern heroes in cyberspace!

But why is historical distortion still prevalent? First of all, we seem to be stuck in our own echo chambers. We only want to hear what we resonate with. So when we are presented with unverified information, we have the tendency to accept it without hesitation as long as it aligns with our opinion. The truth is hard to accept, so we sometimes choose to ignore it and not let it add up to the stress that life brings. Secondly, we are enslaved by nostalgia. As they say, we see through rose-colored glasses. We choose to see the positive side of life while forgetting parts of the past that are unfavorable. Lastly, we easily get carried away, especially when we’re angry. That’s why they say, don’t let your emotions make your decisions.

Consequently, distorted content from problematic ‘influenzas’ also perpetuate because people act out of anger, to the extent that the engagement of the post is boosted and it becomes more widespread. The algorithm behind this acts like a genie. Whatever you consume online, regardless of your reaction to it, similar contents will continue to appear. This targeting of particular audiences and consumers make us the products that are sold to advertisers.

What can we do to oppose the spread of historical distortion? Self check. Before reacting, commenting, or sharing, let it rest, because you might just be acting on emotions. Let’s also try to get out of our echo chambers. Be open to learning from other perspectives. If you think a person lacks knowledge, avoid humiliating or laughing at them, unless they are a troll. Deepen your understanding of the past. This is not merely about random trivias or special holidays that you memorize. Find out why it happened and how it impacts the present. The key is to never forget. 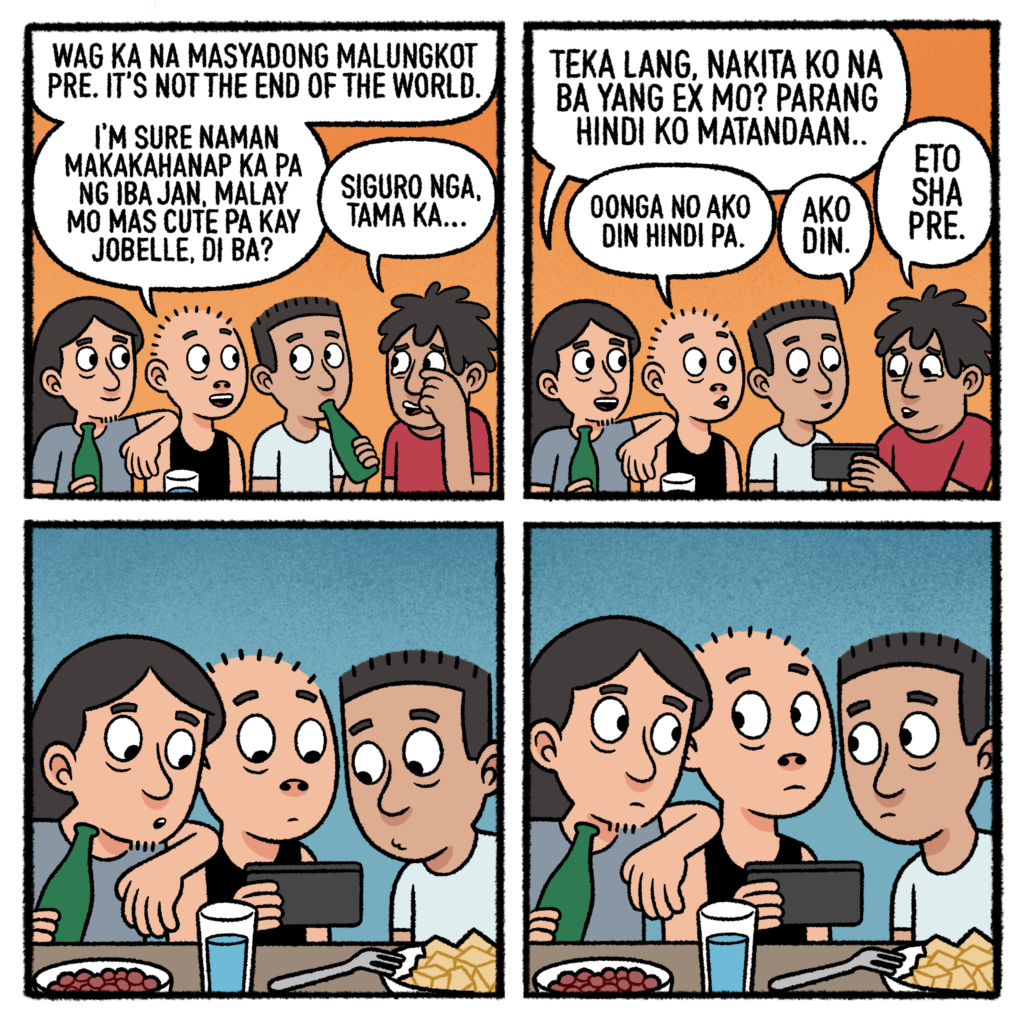 The comic returns to a casual conversation of the four characters.

“But wait, didn’t the riot happen in the Capitol, not in the White House?” the long-haired character realized. Both buildings are white in color, the difference is that the White House is located on Pennsylvania Avenue while the Capitol Building is on Capitol Hill. Kalbo added, “You got it! When a correction is released on a published work, that’s called an ‘erratum.’ Let’s not be ashamed of correcting ourselves. Cheers!”